Node.js vs Springboot Java -Which one to choose and when? 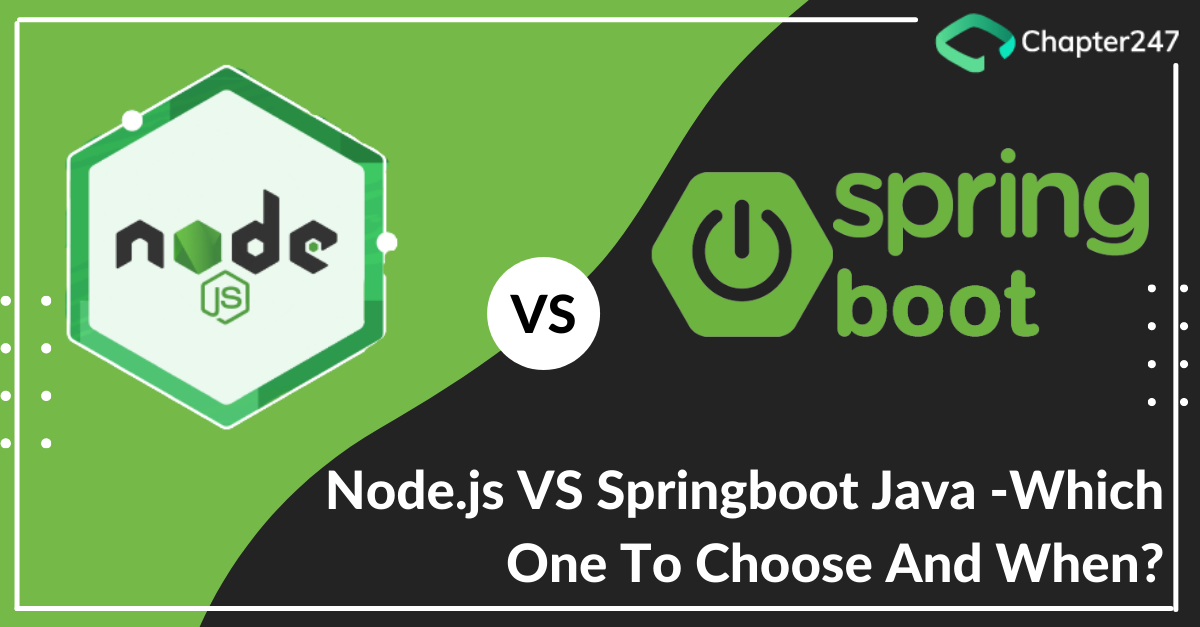 A comparison between Node.Js and Java (Spring boot framework) is essential.

Java is an Object-oriented programming language that is class-based. Developers often use the principle “Write once, run anywhere” with Java as it is quite portable implying that a program written in Java for any platform must run on consolidation of both hardware and operating system. Spring boot Java is an open-source Java-based framework that is used to create a Micro-service. It is considered a radiant framework for ready applications.

While Java is a language, NodeJs can be considered as an all-inclusive ecosystem that has been formulated on JS and in sync with Google’s V8 engine. But, when Java is discussed, not only the language but the JVM or the Java Virtual Machine also is talked about which is why the comparison is essential.

It is crucial to establish the differences between the two frameworks because as we move forward it is important to understand what tools are available and how we can use them to make our applications and businesses better.

This article aims to provide aims to discuss the specialities of both the universe. It will talk about comparisons and facts that will deepen your understanding and will provide you with a base to make relevant choices.

It might seem far-fetched to compare them because one is a programming language and the other is a run-time. But as we decide to decode the Java infrastructure, it can be seen that Java has completely evolved with its own ecosystem considering plugins, API, and libraries. It also has a virtual machine with a run-time environment.

Java is more than 20 years old and was first curated by Sun Micro-systems, which was later taken over by Oracle – its current owner. It has been commanding the server-side development for quite a long time now.

Spring boot is implemented in Java which lets a brisker startup of production-grade and stand-alone applications. It is a bootstrapped version of the spring platform which is not just easy to run but also reduces the procedures to get the application running.

It is all about dependencies while relying heavily on annotations or XML. With these annotations, it eases the configuration process that begins to mountain up with the increase in the project with several dependencies.

NodeJs is not a programming language to be precise because it is a runtime that lets the accomplishment of JavaScript on the server-side. JavaScript is nearly as old as Java and is a language that was hitherto used on the client-side. But with NodeJs and its JavaScript Everywhere concept, the use of JavaScript at the backend too is possible. It was released in 2009 but now it is an open-source community that comes under the NodeJs foundation.

NodeJs are single-threaded which implies that one request can be dealt with one thread. When a request comes, the single thread is used to tackle it. If a database needs to be queried, the thread need not wait for the database to fetch back the data. When the database is completing the specific query, the single thread will be utilized to serve another request. 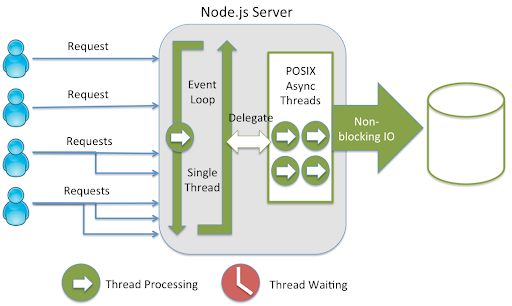 After the database accomplishes its task, the message is posted in the Event Que. Node monitors the queue incessantly. When it detects the event, it removes it and puts it under process. This makes Node perfect for I/O- based applications which have a lot of network access. This will help NodeJs development company to cater to a higher number of clients without utilizing further hardware. And that is why NodeJs is flexible. But NodeJs comes with one disadvantage and that is when calculations are performed for one client, the other clients will have to wait. Hence for CPU-intensive applications that include video encoding, image manipulation NodeJs is not recommended.

Spring boot Java, on the other hand, is multi-threaded which means that several tasks can be performed concurrently. 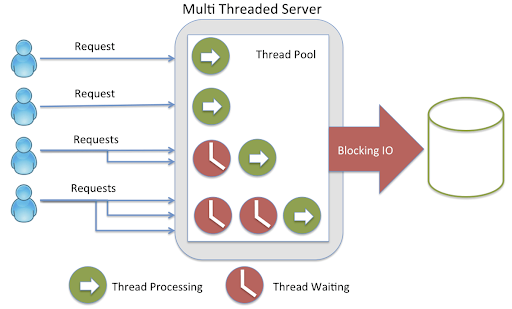 Basically, multi threading helps applications perform better. So, for large-scale projects that involve multiple tasks together, Java is recommended whereas Node.js does not handle the thread as well as Java does. This is the weakest link in the Java universe and its associated frameworks especially Spring boot. m

Multithreading programming is for large-scale projects that involve a lot of simultaneous work. But in a project when every client query has to be handled in a smooth manner, handling a query per client will ensure a smooth transition especially in the case of enterprise application development.

The Input/output communication model also has a great bearing on choosing the framework or the ecosystem to build software. I/O model is the process of displaying the data and also refer to it as shown by the computer. I/O calls are of two types namely, blocking and non-blocking. While the former means that the thread can’t do much unless the entire IO is fully received, the latter implies that when an IO request is already underway, it can easily implement other requests without the need for any wait.

NodeJs apps are non-blocking and Asynchronous. Spring boot Java has a Blocking I/O. NodeJs developers can send many requests at the same time while in the case of Spring boot Java the developer will have to wait for every I/O request.

Enterprise web applications need high concurrency. Java, as we discussed, is multi-thread and as it has to dedicate a thread for each request, it will demand many threads in order to get concurrency. If the user load increases, the cutting of time between these multiple threads becomes an expensive affair. When these threads keep increasing, OS becomes very busy cutting the time that it cuts short the CPU time to do work.

This is where the efficiency of NodeJs comes into play. The CPU will be busy when NodeJs is running at full load, but the OS will not break down and the entire CPU time will be used in doing what you are supposed to do that is servicing the request.

Discover the top frameworks of NodeJs taking you closer to a thorough appraisal of NodeJs development.

Now that the performance parameters have been discussed, it is wise to see how they rank on the popularity chart considering important parameters.

The popularity of NodeJs knows no bounds. The entire ecosystem is transformational and expands the scope of the overall development. A look into the StackOverflow illustration given below, the global usage of NodeJs is path-breaking. 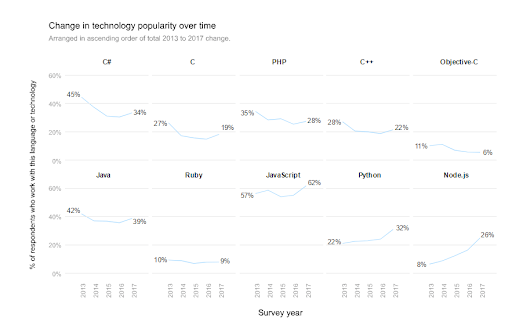 Compared to other countries America is the highest adopter of NodeJs development as it considers it one of the most progressive of all ecosystems. 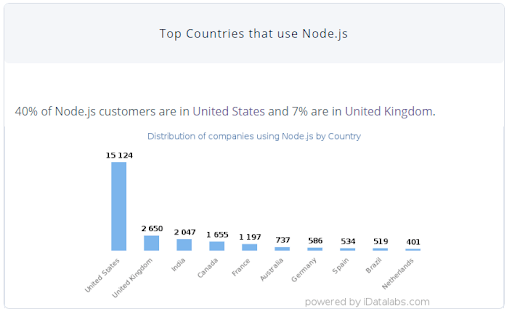 NodeJs has towered the popularity charts in very little time primarily because JavaScript is considered versatile. NodeJs is easy to use, is great for beginners, and has a great support system for developers in the form of libraries and communities.

Spring boot Java on the other hand despite being more than 20 years old is still in demand. It is still employed on distinct platforms for different purposes. Look at the comparison country-wise to see the adoption rate. 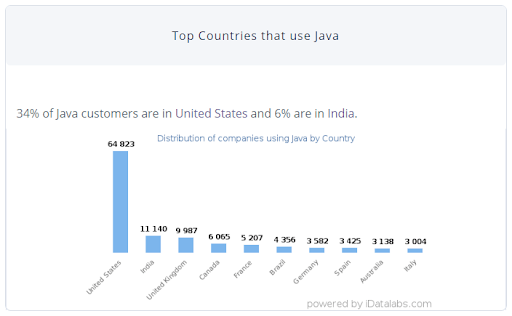 NodeJs application used for different brands is in itself noteworthy and bankable. Its use for top names proves that it has a wider reach and has become very popular.

Catch the top NodeJs development trends you should not miss out in 2020! 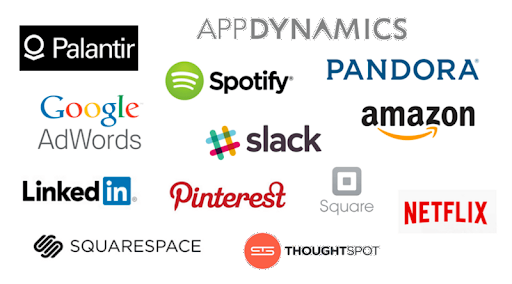 The coverage of Java is wide as it is older compared to Node but NodeJs still manages to draw attention as one of the most preferred in the development universe.

What’s great about NodeJs and Java?

How to choose the right technology?

More than one factor should be used to consider the right selection of technology while building your enterprise applications. With the numbers for web apps increasing by the day, complexities also have increased and as experts in both the technologies we will be glad to suggest the best option. Ask our experts at Chapter247 to discuss your business specifics, goals, values and we assure you of rapid solutions. 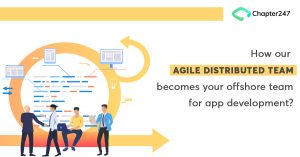 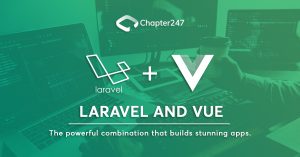 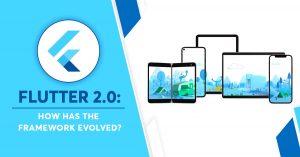